I think it’s important to start this blog by noting that I have had wonderful success making use of tinted glasses when aiming to improve reading fluency. Following acquired brain injury, I will quite commonly recommend tinted glasses (primarily blue) in order to facilitate visual gains and assist with heightened sensitivity to fluorescent lighting. I do this however with full disclosure that the lenses are acting as support for what is, at its core, a fragile binocular (or “eye-teaming”) system.

A discussion of Irlen Syndrome should begin by talking about why colours would possibly have an effect on reading fluency. Are certain people’s brains predisposed to respond more positively to various wavelengths of light? I suppose this is possible, but not very likely. The most commonly prescribed Irlen lens colour is blue – being of a shorter wavelength, blue light is interesting in that due to chromatic aberration it is typically focused in front of our retina, and thereby stimulates a relaxation of the accommodative (“focusing system”) response when clearing text. In other words, it acts in a similar fashion to low-powered reading glasses. Blue light also preferentially stimulates our peripheral retinal cells, expanding an individual’s functional visual field while reading – the reader becomes aware of and will now “see” more. Because of the immediacy of this effect, most problem-readers will report improved comfort and fluency while reading with a lower-wavelength coloured tint in their glasses. This is wonderful and certainly an option for families to explore – but I am typically doubtful of Irlen Syndrome being the true diagnosis. It has been said before that for every complex problem there is an answer that is clear, simple and wrong.

When we look at the contrast between black text and a white background, 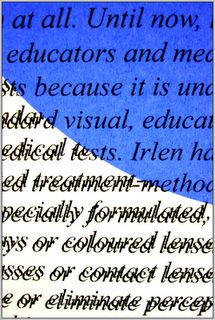 emerging readers who are just learning to accurately use their eyes as a team very commonly run into issues with sustained visual attention at near. In order for our eyes to perceive written text as being “static” and not swimming, blurring or doubling we require incredibly accurate sustained coordination of our eyes – contrary to intuition, this is very much a learned skill. Even subtle and intermittent losses of visual alignment will cause the symptoms of blur and swimming attributed to Irlen syndrome. At its core, Irlen Syndrome is typically an issue related to deficient eye-tracking and teaming at near – a common issue might I note, with 1 in 4 emerging readers presenting with measurable deficits in this area. I say this not to discredit the Irlen community and their supporters, but to make the case that Vision Therapy and reading glasses will also remediate the majority of “Irlen” diagnoses – and, in my opinion, more appropriately address the underlying issue over the long term.

The point of this article is not to discredit the effect of Irlen lenses – as noted above, I quite commonly use tints in the office to achieve a desired effect. Rather, it is meant as a piece of information to ensure that families truly understand their options and diagnoses. If you or someone you know has been diagnosed with Irlen syndrome, ensure that a developmental optometric exam is arranged. If a disorder with eye-tracking and teaming is uncovered, then even if the choice is made to purchase Irlen lenses, they can be thought of as a supportive tool, but not a means by which to address the inherent disorder with eye-tracking and teaming that is very commonly present.

Until next month,
Paul Rollett, OD